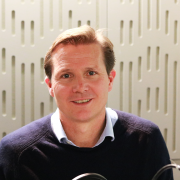 There has been much excitement at The Somerville Foundation office recently since world champion and Olympic silver medallist Roger Black agreed to be the host of our Radio 4 Appeal. Izzy Oag, the subject of our appeal case study, Lowri Smith (photographer) and Development Director Nicola Graves had the privilege of heading into the studio at BBC Television Centre in January to watch Roger record the appeal.

Morning Roger, thank you so much for your support for our Radio 4 Appeal; we are over the moon to be working with you. I will never forget the moment you, Kriss Akabusi, Derek Redmond and John Regis beat America to win gold at the World Championships in Tokyo. I was not quite 17 and my older sister, a huge athletics fan, sat me down and told me this was something I really needed to watch because this was going to be special. She was so right. 1st September 1991 started my obsession with British Athletics.

My first question just has to be about that day…

Having run an incredible 44.6 first leg, what was going through your head as you watched Kriss Akabusi on the home straight?

We all believed that if we could put Kriss right behind the American on the final lap then he could overtake him to win gold. I didn’t actually watch him run until the last 20 metres but chose to watch the reaction of the crowd instead until he crossed the line. Then we went crazy!

You went on to win bronze at the 1992 Barcelona Olympics and 2 silvers in Atlanta in 1996 plus a raft of other World Championship, European Championship and Commonwealth medals. What has been the highlight of your career?

Winning the Olympic silver medal in the 400m behind Michael Johnson was my greatest achievement. It was my last chance to win an individual Olympic medal and I had suffered many injuries and illness throughout my career so it could so easily have not happened. To run my perfect race in the Olympic final was the ultimate.

Thinking back to your childhood, you discovered aged 11 that you had been born with an undetected heart defect. How did this affect your plans?

Being told I had an incompetent aortic valve made no sense to me as I felt fit and played sport all the time and was the fastest kid at school. I wasn’t allowed to play competitive sport to begin with, but soon my consultant allowed me to but I had to always be aware of any adverse symptoms. It was a great worry for my father. Maybe this is why I didn’t join an athletics club or train but I was more interested in football and rugby. I never planned to be a professional sportsman and only took athletics seriously after failing to get into medical school. I never wanted to use my heart condition as an excuse and in some ways ignored it, but my annual check-up with my consultant always reminded me that I could be told to stop running at any point – fortunately this never happened.

Was there ever a point where you thought about giving up?

In 1993 I got glandular fever (Epstein Barr virus) which really tested my resolve as I lost confidence and was constantly tired. This was the time I contemplated giving up as I could not imagine being strong enough to compete against the best in the world again. However, I held onto my dream and slowly got back. My heart condition was never used as a reason for me to give up though, as I didn’t suffer from any serious symptoms and my annual check-up never showed any signs of deterioration in my aortic valve efficiency.

You have achieved incredible success throughout your career and are an inspiration to millions. What advice would you give other people who were born with heart defects?

I have been lucky as my chronic heart disease hasn’t got worse or affected me adversely. There are others much worse off than me. In theory I shouldn’t have been able to train so hard and run so fast but I never wanted to use it as an excuse. My advice is to be regularly monitored and take the advice of your consultant, but to also listen to yourself and your body as only you know how you feel each day.

You are one of the most popular sporting heroes of our time, have been awarded an MBE, have enjoyed a successful presenting career and are one of the UK’s most respected motivational speakers. What next for Roger Black?

As I get older I am more aware of my heart condition and stay healthy through a little exercise each day. Professionally I run a business with fellow Olympian Steve Backley – we help people apply the Olympic mindset to their skills and knowledge in business, property and fitness. My wife Julia and I have teenage twin boys so are always busy!

Thank you Roger, from the bottom of our hearts. They say you should never meet your heroes but based on today, I recommend you definitely should!