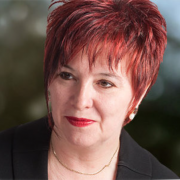 Leigh Nisbet is a Trustee of Somerville Heart Foundation.

She is a Criminal Defence Solicitor and Advocate at a long-established East London legal aid firm.  She represents some of the most vulnerable in society accused or charged with criminal offences at police stations, Magistrates Courts and in the Crown Court.  She practises in all areas of serious crime but specialises in motoring offences and is Head of Road Traffic Law at T.V. Edwards.

Prior to qualification as a Solicitor, Leigh spent many years as a Medical Secretary.  Whilst studying in the 1980s she worked as a freelance secretary in all areas of medicine in both the private and public sector.  She had a particular association with Cardiology and specifically the National Heart Hospital in London, who was one of her main clients.  It was at that hospital in the summer of 1981 that she first met Professor (then Dr) Jane Somerville on the Paediatric and Adolescent Unit.  Leigh worked for all the Consultants at the National Heart Hospital over that decade, becoming Dr Lawson McDonald’s personal assistant for three years at his practice in Upper Wimpole Street.

With the closure of the old National Heart Hospital at the end of the 1980s and its amalgamation with the Royal Brompton Hospital, Leigh became personal assistant to Jane Somerville at that hospital from 1991-1999.  She was working with Jane when the Grown-up Congenital Heart (GUCH) Patient Association was founded and the new GUCH Unit was established at the Brompton.  After Jane’s retirement from the Brompton, Leigh continued as her personal assistant at the Harley Street Clinic until 2002 whilst attending Law School in the evenings

Jane Somerville trained numerous doctors from around the world in the specialty of grown-up congenital heart disease, returning them to their own countries to set up services for patients worldwide.  These doctors were known as the Unicorns.  One of the Unicorns from Chile wrote to Leigh on her qualification as a solicitor, commenting:-

‘I am sure you will be a good lawyer.

If you have stayed all these years with Jane,

then you have a lot of experience to argue with anyone!’

Despite leaving the Health Service for the legal profession some 20 years ago Leigh has continued her association with Jane Somerville and hopes to give some insight into the days she spent working in the pioneering world of Cardiology and Grown-Up Congenital Hearts.